Sevent segment, who doesn’t know this, for you who are hobby or maybe your job is in the field of electronics. For ordinary people, even though they don’t know that the name is actually a sevent segment, they have seen this thing. Usually known as number displayers, LED numbers, digital numbers, and so on.

For me, when I saw the seven segment, I would imagine digital clock directly because I got in touch with everything about digital clock for almost a year when I was in vocational high school (SMK). At that time, the digital clock didn’t use a microcontroller instead but used a logic IC that its clock source was from the timer IC NE555, It totally didn’t work at all, right?

In addition to make a digital clock, the seven segments or the number displayer is commonly used to display the timer of traffic light. The seven segment or its numbers are so bright and very big in size. Does anyone sell that big seven segment? Of course it does, but it is a custom which means made by someone, not from a fabric or manufacturer that has been casted like the small seven segment.

Well, actually you could create the big size seven segment in low cost. The seven segment itself consist of a series of LED that assembly series parallel and then each segment was casted by epoxy coating so that the LED’s flame inside looked like assertive blocks not like a single separate LED.

The cheapest way to create the big seven segment was using strip LED. stirp LED was an LED that can be used for a car or motorbike’s accessories so that looks colorfull. The advantage of this LED: we could cut them into pieces according to our wishes (with condition, usually every 2 LEDs or 4 depends on the type) so that the LED strip that we were going to use, its long was appropriate with the project. Nowadays, the LED strip was commonly used for filling the embossed letters of a billboard or an advertisement box to replace the TL lamp as the lightning inside. But if you used the LED strip as a seven segment, it had some disadvantages. Your display number was not so cool and stiff, looked like plain horizontal lines just like this bellow image that I got from google.

In order to make your seven segment’s display look cool, I had the cheapest way. Below were some materials you had to prepare:

Alright, which material was hard for you to get? Thick cork, so did I. I just found thin cork in a book store and then I did this, I piled 2 corks up then stick them together. Do you have the cork cutter? Well, I didn’t have it so I made one (again and again at low cost). Just click here to know how I made it. Transistor 3904 or you could change it with NPN transistor that its collector current was quite big. The bigger the seven segment that you made, the bigger current you need, in addition of the LED’s type used here also determined the current. The cork glue here used for combining the cork / styrofoam together or combining the cork with the carton or other papers. You could also use wooden glue if you didn’t have the cork glue, I have tried to use it and it stick properly. The carton, of course you could find it in every bookstore like Gramedia as well as for the tracing / transfer paper and baking paper.

Well, the steps we should start now is drawing the seven segment that we are going to made. What is the drawing for? The drawing will later be used as a reference to cut its cork or the styrofoam. The drawing technique used here is depends on your favorite, manually or using the computer. I prefer to use the software on a computer.

I used the CorelDraw application. Don’t worry, it is so easy. Download the seven segment’s fonts from google then use that font to type the number “8” on the Corel and then resize the number, make it big. I resized the number as big as the size of A3 paper, make the line thickness thicker after that you can print it directly.

If you want a simpler way, just search for a good seven segment picture on the internet then enlarge the size, then print it directly, like this picture that I took from google.

Well, the seven segment on that picture was still simple and looked fat, you could find a better one. Once printed, simply cut out each segment of the picture so that it has holes. And the glue the paper on the cork you have prepared.

Once it has done, then create neat, and stright lines on the cork using the marker, this lines will help us to create holes on the seven segment’s cork. Therefore you should test it first and practice to cut the cork using other materials.

Once the cork holes appropriate with the template then I stacked its front part with a black carton, make holes on the carton before. You could do this part or not. The purpose of this part was to make an impression of clear lines of each segment once it was given an LED light, because my cork cut was not neat enough hehehe.

Now, prepare the LED for the seven segment and the carton used as a base. Again and again we need the template with hole to create a pattern on the carton as a reference for putting the earlier LED. Here I used only 3 LEDs 1 W in each its segments.

The LEDs which we arrange on each segment, I collated in series for the each segments and then connected to a single NPN transistor that we have been prepared. For this project I used 3904. Collector pin I connected to the end cathode of the LED series. While the anode, for the voltage, I gave 9 volts so when I tested, the currents generated was about 200mA on each segment.. 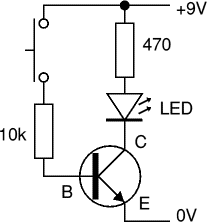 If the usual seven segment has input seven segment that we give some voltages on the “common” and GND of each segment, it turns on (CA). But for this project, the part that acts as the “common” is the anodes of each LED, which you have to make it as a single one. While its each segments pin, because I used NPN transistor that will be active or turn once it given the positive voltage on its base transistor then each segment will be active if the transistor’s base are given the positive signal, not the GND as the finished CA seven segment.

Once you completed the assembly, remember its base put the resistor before exiting the wire. For me, I gave 1K resistor.

Pull out all the wire bases of each segment together with the “common” wire and the GND. Then glue the carton with LED to the cork that has holes. Try to close or cover it using the baking paper, how is the results. Cool as cool as the seven segment from the manufacturer. Wait, turn it on, how cool is that!

From the photo shown above, it was proved that the seven segment that we create here is so bright so it is good to be used outside the room which of course you have to make a casing for this seven segment, given that cork may be damaged by the weather.

If you are experiencing the light of the segment display is uneven or it shows the ELD points that are used, you can outsmart it by adding a tracing paper in each segment to cover the LED, make that paper convex in shape. This will create a diffuse effect so that the emitted light is not focused on a single point as shown on the image below.

Alright, this is the end of this tutorial how we can make big seven segment in very simple, easy, and inexpensive that did not require any complicated tools. The microcontroller circuit to turn this seven segment on, you could see it from the following article. Please check out the video I have posted on my Instagram.

2 gagasan untuk “How to Make a Big Seven Segment”

This site uses Akismet to reduce spam. Learn how your comment data is processed.